Playing multiple tables I got the same flop on the two tables at the same moment. Makes you wonder about the random card algorithm they are using. 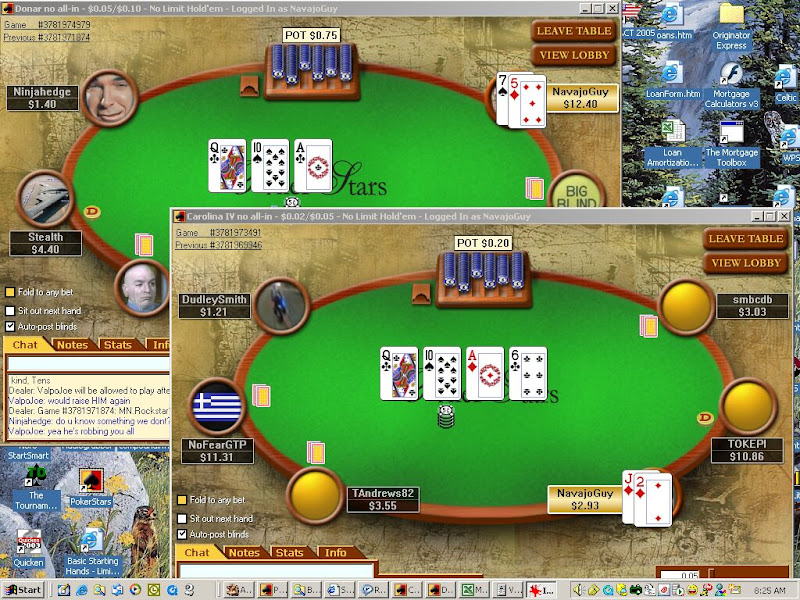 Bad Beat Of The Year Award 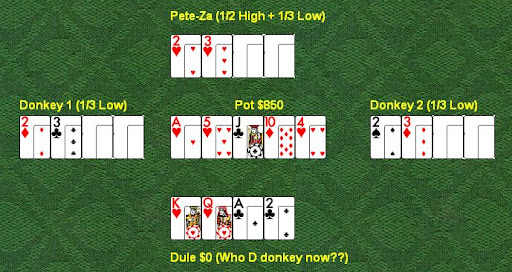 This is my favorite bad beat (so far). It was January(or February) at Badger Bowl, and we played Omaha H/L Pot Limit. We were just learning the game, but had a lot of fun. I had a nice starting hand: Kh,Qh,Ac,2c. Turn 10d gave me a nut straight. With one more heart on the river I could make a nut flush. There was four players in the hand, so I bet the pot thinking if another low card comes I can at least chop, if not scoop the pot. Other three idiots didn't have much. All three were just drawing to a nut low(bad habit for PLO). Well, poker gods have their way of having fun. River was 4h, that made my Ace high flush, and a nut low for other three, and a staright flush for PeteZa. So my odds from: scoop 65%, and win high 98%, down the drain, and I got $0.
2 comments:

November 2007 I won $30 satellite to Poker Stars Sunday Million. This was my best online score so far. After playing eight and half hours I finished 59th. There was 6398 players and the 1st place prize was over $200,000. I cashed out $2559. For about five hours I was the chip leader, than about 9PM cards just stoped and I blinded out. 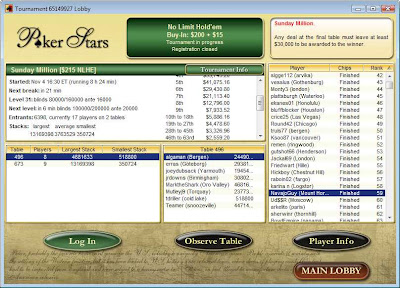 Email ThisBlogThis!Share to TwitterShare to FacebookShare to Pinterest
Labels: Online

I'm just the guy who loves poker. I play a lot, over 120 hours per month. Sure, I have no life. Just go to work and to a poker game in the evening. I would like to win more often, but my style doesn’t let me. I decided to sign the blog with Tin Cup, because that describes my poker style. You remember the golf movie “Tin Cup” with Kevin Costner and his 12 attempts on the last hole. That’s how I play poker. It’s a suicide, but when I hit it .. mmmm ... the trill, and some warm feeling inside. Can’t describe it with words. It’s like a bungee jumping, you just have to try it.
Topic is poker, and stuff around it. We all have bad beat stories to tell. I’ll try to make them more interesting than “…my aces got cracked by 7,2 off suit”. I want to share my poker interest with you. You are wellcome to comment, call me a donkey, but please let me enjoy my ride.

I need this poker diary for the future. Years from now it can become a nice collection of interesting poker moments. It all started last night in the poker room of Ho-Chunk Casino (Baraboo WI). I started to play about 6:00PM and left 40 minutes later after my third pocket Aces lost to 8, 4 suited. Flop was A,10,6 all hearts. My “all in” was just for $60. Yes, I saw three hearts on the flop but I was steaming from the previous two times when I had aces, got a set on the flop both times, and saw donkeys hit their gut-shot straight on the river (both times). Hey, three times in 40 minutes. Let me see you top that. Still, I was cool, and I just said “boys I’m going to write this in my blog tonight.” I didn’t have a blog, so here I am staring one.

Interesting film trivia:
"The scene at the end of the movie where Kevin Costner hits the shot into the water hazard again and again was based on an actual event. Gary McCord the commentator with the handlebar mustache in the movie is an actual commentator and former pro. In a tournament he had a similar shot to Costner's. He needed a birdie to win and went for it. He shot over and over again and finally got it in 15 strokes. In the movie Costner gets it in 12."
No comments: