Here's the truth you don't want to hear. I know it hurts even to think about it, but brother you are a loser. Yeah, I know the word "loser" may offend you, bat there are the facts.

Many experts estimate that because of the rake, tips, and other expenses 85%-90% of all card room and online players are long-term losers. Jay Lovinger, an ESPN columnist, says the numbers are even worse. There is no data to support this for live games, but that is easy to track for online poker sites. Two sites revealed that only 8% and 7% respectively, of all players on their sites finish the year in black.

Is it possible to train like for any profession and become a winning poker player. The book "Poker Winners Are Different" by Alan N. Schoonmaker talks about characteristics of the winners. I orderd the book just based on the chapter titles that can be used as points to analyze yourself.

Dr. Alan Schoonmaker, author of four books on industrial psychology (in which he holds a Ph.D.) as well as numerous poker articles and three other books that focus on psychological issues in poker. I believe that this book can help you more become a winning poker player, than any other poker-math book. 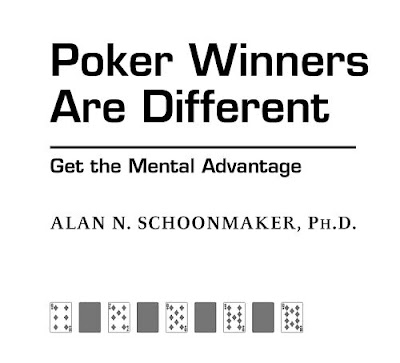 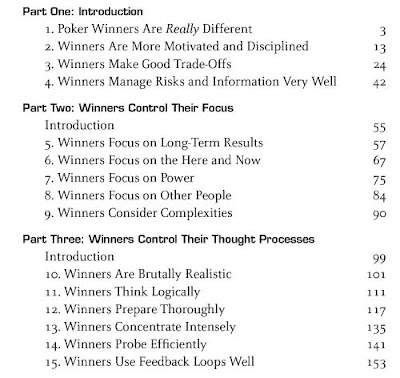 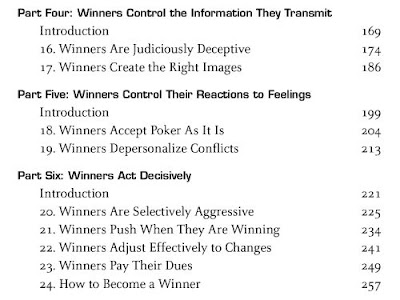 Email ThisBlogThis!Share to TwitterShare to FacebookShare to Pinterest
Labels: Books

Phil Hellmuth, in the book titled Play Poker Like the Pros

. classifies poker players in 5 general categories, only 4 of which most of us will ever get the chance to play against. They are the mouse, jackal, elephant, lion and eagle. Their poker characteristics are as follows:

The mouse is an ultra conservative player who plays very strict starting hand requirements (see Hellmuth's Top 10). The mouse will bet, but rarely ever raises a bet or reraises. The mouse almost never bluffs. If a mouse actually does raise or re-raise, it probably means they have an almost unbeatable hand. The mouse's weakness is that he or she is simply too predictable. When the mouse starts to raise, good players typically fold their hands, and in the mouse loses out on some chips they may have won, had they not earned themselves such a stodgy reputation. This character type is also referred to as a rock For the record, mice tend to make more money than they lose, especially at low limit loose games. Their pots are not always the largest in the world, but they take down way more pots than they lose, due to their conservative play.

I have found jackals to be pretty common animals in low limit, online poker rooms. This type of player plays a lot of cards, and bets and raises with abandon. He is the direct opposite of the mouse. The jackal's chip stack often resembles a roller coaster ride, as it will climb when he has great cards, and then fall back to near nothing when he has a string of bad cards. You can make a lot of money off a player like this. Do not ever be afraid to call a jackal, because since they play loose, you will catch them bluffing with trash often. A jackal is destined to lose his money if he ventures far beyond 50 cent ante poker, where good players see him for the loose player that he is and take advantage of his weaknesses.

The elephant is what most poker players refer to as a calling station. The elephant has loose starting hand requirements, and so he plays in a lot of pots. As a result, he ends up in alot of hands that he or she has no chance of winning. The elephant is content to call his hand to the river, even when common sense tells him he’s beaten. This type of player does not lose all of his chips at once, since he generally prefers calling to raising, but over time, the elephant contributes most of his chip stack to the other players. Hellmuth notes that there is no point in trying to bluff the elephant, but if you have good cards, you know he will pay you all the way to the river. I have found from my experience that this animal is the predominant one found at online low limit tables. Watch a few games, and you will notice the huge number of online players who play practically every hand, and call to the river with complete trash. The elephant will beat you occasionally simply because he is willing to draw till the end. On the whole though, this is yet another player who is easy to make money off of.

The lion is rare in low limit games. He has good starting hand requirements, but will occasionally take a calculated risk on cards not on his list. The lion plays aggressive poker when he is ahead and folds when he is behind. Occasionally the lion will bluff in an advantageous position, but his bluffs are rare enough that the other players must respect him. The lion is an excellent poker player, and makes his living taking chips from the mouse, elephant and jackal. A tight player who takes the occasional risk or bluff to keep from getting labeled a rock would be a good example of a lion.

The eagle is a character that most of us will never reach or even play against. The eagle represents the pinnacle of the poker world. He or she has studied the game for years and is now in the upper ranks of the poker world. Hellmuth considers an eagle to be one of the top 100 players in the world. If you reach this status, the rest of us will be watching as you take down pots on one of the several televised poker events!
No comments: