Football Sunday, and the Bears are losing, life is good. To kill some time I started $2 PLO Hi-Low tournament. In the second hand I got lucky and rivered the flush, so I doubled up.  Other two guys split the low hand. 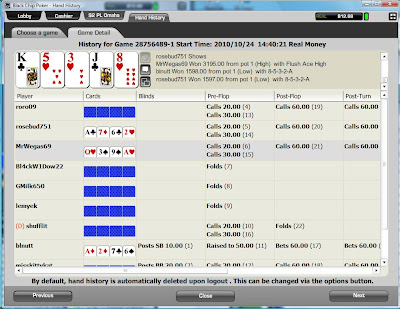 Just a few hands later we had this wild hand. There was no raise pre flop. Three checks on the flop, and than the guy with nut low draw made a T245 bet. Other three players decided to call.  I couldn't understand the play. My KK may be good for now, and I had a flush draw so why not ... it's just a $2 tourney, so I bet the pot T1960.  Well ... all of them decided to gamble. Five of us all in, and the pot was over T10000. On the river I had a nut straight. Scoop, there is no low pot. 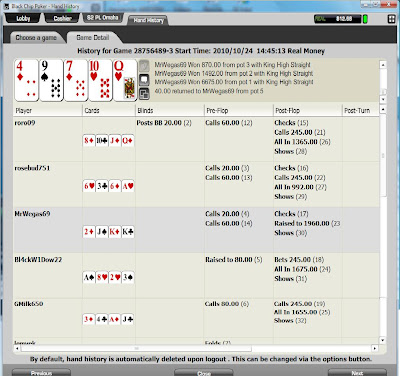 ﻿
All of us played like under the influence of Cialis overdose(increases blood flow to a certain area of the body ... and no blod left in the brain). First player flopped the straight. I can't understand what was the second player looking for with 636A. Player with A823 was chasing the low without high hand, and the last player had a nut flush draw with the second nut law draw. My play was so bad ... so I can't make any comments.

Email ThisBlogThis!Share to TwitterShare to FacebookShare to Pinterest
Labels: Omaha