Friday - Bad seat at Ho-Chunk
I went to Ho-Chunk after work. They just opened a new table, and I found myself in the middle of Donkeystan. It started good. I made a few moves and after one hour I was up about $350. Than ir started. A big donkey (Elephant Donkey) at the table suddenly decided to play like "I'll rather be stupid than fold" and got lucky by hitting a few river cards. I couldn't win a hand when he is in the pot.

In the next hand, i rivered the second pair, but that queen made his straight.

This was the hand I could win big if the heart came on the river, but no cigar ...

Finally I won a hand.

I couldn't win a hand without loosing much bigger pot after that. After playing four hours I was in for $900, and down to my last $150. When one of the players left I changed the seat. At that moment Baraboo Bob came to my table and got my "bad" seat. He played with the same luck, loosing on the river numerous pots and lost over $1000. My luck changed with the seat change. I had a few nice pots with Bob, and gor most of my money back. Night ended only $200 down. About 3:45am Bob flopped the full house in the last hand of the night, and that was the only hand he didn't lose on the river. That seat was so bad.

Saturday - Nice Omaha Pot
This was a special ocassion game initiated by Dave A, who lives in Janesville. We started about 4pm and played till 2am. table was good with a few from my regular poker crowd Mat, Ted and some fish. We played round by round Holdem, Omaha8, and Crazy Pinaple. From the start of the game I was winning $300, than $600, than came a long 'card dead' period. About midnight I won a nice pot in omaha, and finished night with plus $850.

In this hand from the start I had many outs for a nut low, flush, and a big pair with a suited ace. 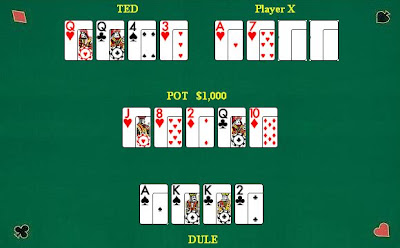 Sunday - Day off ... no way
Some of the guys from the last night started the same game about 1pm in Middleton. We played for about three hours, and most of the time I dominated the game. Again in one of Omaha hands I came from behind to beat Ted's set on the river. Game was over about 4pm and ... I went to Ho-Chunk. Game was slow and boring with tight players, including two girls. I was up $150 and start thinking about leaving when, I called an all-in bet thinking I have QJ. There were two queens on the board. My opponent had QJ, and ... oouupsss ... I actually had J,10. It took me another five hours to get my money back, and go home with $60 plus.