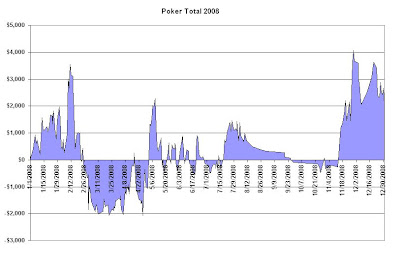 Year 2008 was a big disappointment. After having a good second half in 2007, I set my goals to double up my success in the next year. It started good, and by Feb-11 I was up over $4000. Than came a big loss at Potawatomi. That was followed by six months long rollercoaster of ups and downs. Most of the games I was card dead, and I was not able to put 2-3 winning sessions together. Bad beats and bad cards became daily standard. February and March were loosing months, followed by three positive months but the total for the first half of the year was negative $500.

July was a good month +$1275, and the year total was positive again. August I played 14 sessions and only three were positive. Cards were still running bad for me so I decided to slow down and play less. After skipping first three weeks in September I played five loosing sessions for total of 10 hours and -$450. I quit.
Next time I played October-23. In that week I recorded 4 loosing and one winning ($550) session. Total for October, 5 sessions, 20 hours, and -$240. Should I quit, or …?

Email ThisBlogThis!Share to TwitterShare to FacebookShare to Pinterest
Labels: Stats