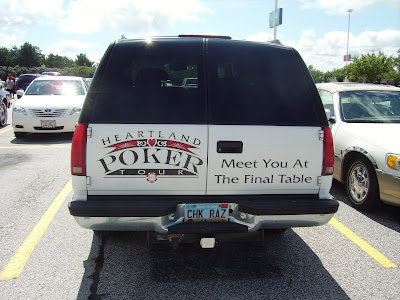 No cigar for Mr. Wegas.

I left home Thursday about noon, and came back Sunday evening. This trip was fun. I played a lot of poker, killed the cash game, but no luck in tournament. It's all my fault. I was not patient enough. I played for three hours but not many hands. Tournament had four groups of 100 players and each group played eight levels, down to about 35 players that will continue playing Sunday. Final six will play Monday for prizes. Forty places are paid and first place gets $144,000. Friday morning in group A I noticed the last year champion Bob Whalen from Cudahy, WI. I went to say hello, and told him "don't make a habit of winning this." Bob smiled saying "I'm trying."

and I decided to cal pre-flop re-raise. I was sure he had pocket aces, and decided to gamble with my "aces cracker". Flop was

and I raised his bet to 3,000. He called fast, and I knew he is not folding on the river. The river was

Well, not that fast. For next 90 minutes I didn't win one pot, and lost some chips chasing the flush. After the break I had 14,000. First player busted out and we got a new player with a big stack. I picked up

Blinds were 300/600 and the new player made it 1,200 UTG. Min raise ... what is it? Small pair or a bad ace ...? Everyone folded so I decide to gamble and pushed all in. He was thinking forewer and when I made impatient move he said "call" and fliped

Board was ten high, and I had enough strength to say "good luck guys".

Phil Hellmuth may question my pre-flop all in move, but I don't play like Phil. Phil doesn't play like I do, and Phil has eleven bracelets.

While I was playing tournament three of my poker friends arrived from Madison, Ted, Sven, Dan W. They played some satellites, and the cash game. That night I stayed in the cash game till 5am. After midnight game was wild with some local guys. We were raising $25 pre flop with 92, and played any two cards. To illustrate the game, here is the last hand of the night. I had

and called $20 pre flop raise. Three of us saw the flop

Small blind checked. The BB made it $50, and both of us called. On the turn came

and all three of us went all in. SB had

and the river card was

Saturday and Sunday I did good in the cash game. Sven made it deep in the tournament, and when I left he was in the last 44 players. Later I found on the web site that he finished 24th. Click for the results http://www.heartlandpokertour.com/eventinfo.php?yid=2010&eid=15

Email ThisBlogThis!Share to TwitterShare to FacebookShare to Pinterest
Labels: Tournaments