This year didn't bring anything new, but regular rollercoaster. It's always long period of bad cards followed by a period of lucky hands. When you compare/sum both cycles you get your totals. It was really bad for a few weeks in April. I had ten losing and only two winning sessions. Starting May 7th, in 34 sessions I lost only 10 times and won 24 times. Only one los was over $500, but I won 11 times over $400.

I played 13 local tournaments and went to Tama, IA for Heartland Poker Tour event. I cashed only once, and for the first time I have negative balance for tournament play. In 79 cash game sessions I spent 491 hour for an average of 6 hours per session. The most hours I played was in March 135, but only 44 in January. Monthly average is about 80 hours, or 20 per week.

Chart shows that my cash game is positive, but still I made just one half of what I planned for the year. Thirty-seven times I won less than $500, 12 times won over $500, and once won over $1000. Fourteen weeeks were pozitive and eleven negative.

I had 28 losing sessions, and seven times lost less than $200, fourteen times lost between $200-500, and six times lost between $500-1000, and once lost over $1000. In the past, most of my loses were less than $200. I have to go back to that and control the number of re-buys when I see that cards are not going my way. My biggest lose was at Potawatomi when I lost every big pot with good cards. I flopped a set of jacks and kings and lost both hands. I had pocket aces three times and lost all three. That was the most unlucky day of the year.

It is important to track your games and record every hour and dollar and location. Analyzing your numbers can tell you a lot about your game. You can often see what makes the difference and make adjustments to your game. If you have Microsoft Access on your computer download database I created and start tracking your games. Also there are web sites that offer free services. Click here for more info on Poker tracker database http://www.mrwegas.com/2009/07/game-tracker.html 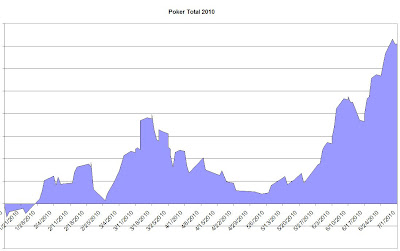 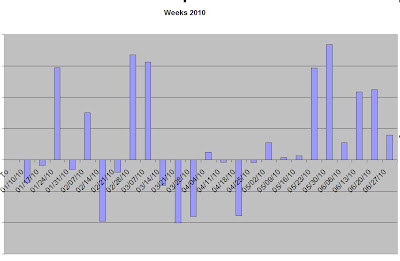 Email ThisBlogThis!Share to TwitterShare to FacebookShare to Pinterest
Labels: Stats