Dear Card Player magazine,
I didn't believe it can happen to me, but Friday night I got raped. I was playing in my friend’s home game and just couldn’t win a pot. What ever I had, it got beaten on the river.
It started with me playing three times famous Baraboo Bob’s 6,3 and getting a god flop, but the river card cost me $350. Re-buy, and one hour later I had my money back when the horror show started. After a first few bad beats I delivered some myself, and beat twice pocket Aces. Interesting it was both times against players of the Korean origin.
Tired of loosing with a good starting hands I called Charlie's pre flop raise with 4,3 and the flop was 4,3,2 and we were all in for $350 pot.
Than little later I was holding Q,Q against Tac’s A,A and got the flop Q,Q,10.
After that I couldn’t win a hand. River, river, river ... all night long. Here is the worst one. As a dealer I just called the pre flop raise. On the flop we went all in ... but sometimes stars are aligned against you(me). 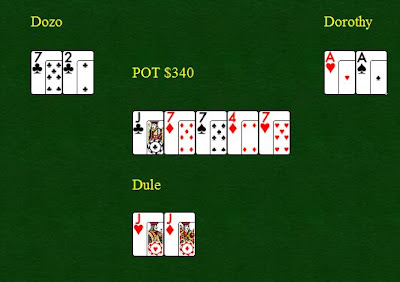