The worst week of the year. After loosing on Tuesday, Thursday, Friday and Saturday, on Sunday I won $120 and it felt like it's ten thousand.
Another example with JJ
Just don't overplay that junk. Here is the hand from Saturday night at Ho-Chunk Casino. Some kid raised $20 pre-flop, and I called. On the flop he bet $10. I made a comment and raised $20. Turn card he checked, and I bet $100 followed by his all in.

This one I folded pre flop. It's a re-buy tournament but I was trying to play it only with my initial buy in, so I decided to fold jacks even it makes no sence. 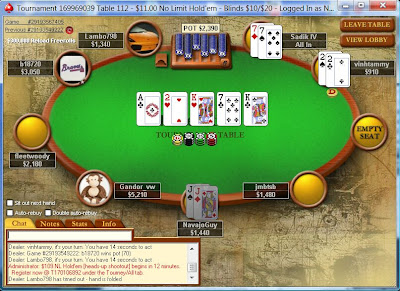 Email ThisBlogThis!Share to TwitterShare to FacebookShare to Pinterest
Labels: Week