This week was slow, and makes me wonder if I'm entering a longer 'card dead' period. I played 34 hours including one tournament at "The Red Mouse", and scored negative $95. Tuesday night I stayed till closing at Ho-Chunk. About 2am I was even after playing 8 hours, but decided to leave with a win. Well .... I left with a lose of $400. Weekend was a killer. After 17 hours I left home even. I spent Sunday playing online tournaments.

This week also ends the first half of the year. I played 24 weeks, and had a 2 weeks vacation in Serbia. I had 15 positive weeks, and lost in 9 weeks. My goal was to manage the amounts I lose. The first week in June was the worst of all, and I ended even in next three weeks, so June ended as my first negative month this year. In 117 sessions I played about 800 hours. I won in 75 sessions and lost 42, making a little over $10 per hour. My rate per hour is getting worst, and I spend a lot of hours at the poker table. But what else can I do with my free time? 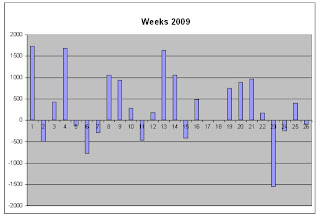 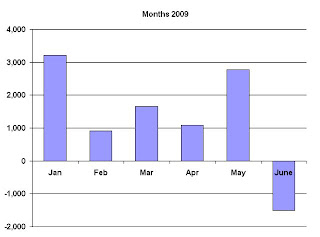